How to Date a Feminist

On Friday night I went to see ‘How to Date a Feminist’ at the Arcola Theatre. I’ve just started a programme called ‘The Artist’s Way’, all about releasing your creativity, which involves taking your inner artist on a date once a week. I often go to things alone anyway, as I enjoy (often prefer) my own company, so it didn’t feel weird being by myself.

It opens with the two main characters – Steve proposing to Kate, but Steve has been raised a staunch feminist by his activist mum Morag. So before he can propose he must apologise for the patriarchy, and everything they have done over the years (ancient Greece, FGM, domestic violence, footbinding). Kate seems to find all this a bit excessive and in the end just shouts ‘For fuck’s sake! Propose!’ 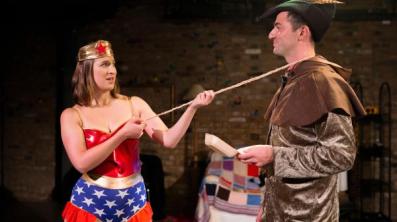 It then goes backwards in time to the night they first met at a fancy dress party. Kate is dressed as Wonder Woman and Steve is dressed as Robin Hood. Because ‘he’s a brilliant ethical hero…he basically invented the welfare state’. Kate thinks the whole point of Wonder Woman is that you can see her pants and Steve explains (mansplains?!) why she’s actually a fantastic role model.

Kate’s ex, Ross is also at the party, dressed as Superman. When they were still together, he had wanted her to come as Lois Lane, but they broke up because she caught him shagging the intern. Kate tells Steve all this and reveals that she can’t help liking ‘bad men’ – men like Heathcliff from ‘Wuthering Heights’. Steve questions this and doesn’t see the appeal of it. He thinks that Kate should stop ‘liking bad men’, of course implying that she should go for someone like him.

So in the words of No Doubt ‘Why do we choose the boys that are nasty?’

Because nice guys are known for being boring. Even Jess in ‘New Girl’ is reluctant to date someone because he’s ‘too nice’. Nice doesn’t get women off. But bad guys don’t make for good boyfriends. So where does that leave us?

I think a lot of women have this conflict of wanting a ‘bad man’, because they are more ‘exciting’, but then also wanting a man who will treat you properly. This is definitely something I have experienced. And it seems difficult to find someone who is the perfect mix of half way between the two. But it looks like Steve has gone too far the other way. The first time he and Kate are making out he keeps asking for her permission (May I kiss you? May I kiss you again with my tongue? May I kiss your collarbone?) to the point where it just becomes ridiculous.

Later at their wedding, Kate’s (more traditional) dad and Morag end up kissing and start taking each other’s clothes off. Steve and Kate find them together and Steve just can’t understand why his mum would consensually have her hair pulled, and assumes that Kate’s dad must have forced her into it in some way, because her dad is the sort of man who just ‘takes what he wants’.

Kate and Steve begin to argue and Kate tells Steve that she wants him to take what he wants sometimes – ‘make decisions, choose wine, open doors, drive a car, operate a drill, eat steak! Be a bit rapey when we go to bed’. Steve is especially offended by the last one.

I can see how it must be very confusing for some men, especially very ‘feminist’ men who have been taught all these years not to hurt a woman, yet are met with inner conflict when they find that a lot of women would like to be sexually dominated, to varying extremes. I’ve definitely experienced this, and remember I had sex with one guy a couple of times who was willing to be quite rough, but absolutely refused to slap me in the face, because he just couldn’t do that to a woman. On the flip side, I feel some guys need to remember that just because you are into that kind of sex, doesn’t mean that you don’t deserve to be treated with respect. 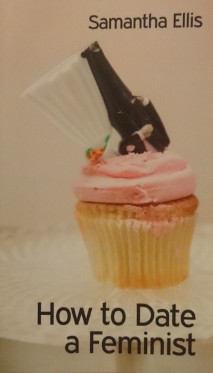 definitely can’t reach orgasm if the woman doesn’t look like she’s enjoying it.

The play also opened up the idea of whether men can be true feminists.  Even Steve ends up shouting at his mum in a slightly threatening way. She tells him ‘You’ll never know how it feels. You’ll never really understand.’ And I think she has a point here, and maybe that’s why Steve has been over-compensating this whole time, because he can’t really imagine what it’s like to be a woman.

Another thing that annoyed me about Steve is that he still got down on one knee to propose in the traditional way AND gave Kate an engagement ring that he chose. One thing that is a majorly problematic for me about marriage in heterosexual relationships, is that it is almost always men who propose, and women who wear engagement rings (I was delighted recently when met a man who was wearing one that his fiancée had bought him). Steve also says at one point that he wants to rescue Kate, like she’s some sort of archetypal princess in a Disney film.

It was a very funny show, that raised some interesting points about feminism, and the relationships between men and women. Both actors were outstanding, especially the way that they seamlessly moved between different characters. I particularly liked when they skipped down the aisle to ‘Robin Hood, Robin Hood Riding Through the Glen’. Plus the fact that Kate’s suggestion was Kate Bush’s ‘Wuthering Heights’, and she wanted to act out being let at in a window. Some of you may know how obsessed I am with this song – I think I may have laughed particularly loudly at this point. (If I ever do end up getting married, I will be using this idea…)

I guess ultimately it’s important to have a balance, not to be like Ross, Kate’s ex, who only sees Kate in very reductionist terms, (basically just wants her for sex, and keeps trying to get her to write lifestyle pages instead of more serious journalism),  but not going so far the other way that you view women as needing to be mollycoddled or ‘saved’. And I think this balance can come from more men starting to treat women as people, with complex thoughts and behaviours, rather than ‘just as women’.

‘How to date a Feminist’ was at The Arcola Theatre 22nd Nov – 17th Dec 2016, written by Samantha Ellis and starring Tom Berish and Sarah Daykin

One response to “How to Date a Feminist”